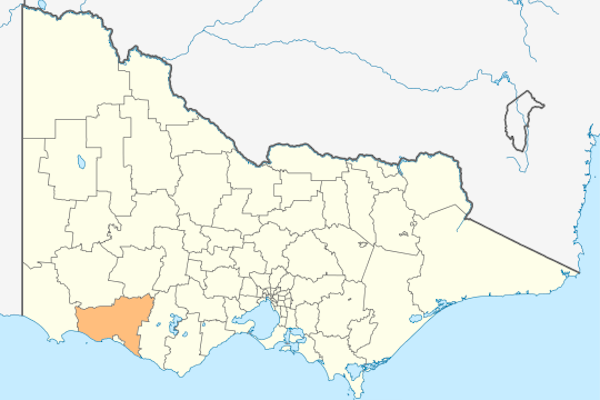 The Shire of Moyne is a local government area in the Barwon South West region of Victoria, Australia, located in the south-western part of the state. It covers an area of 5,478 square kilometres (2,115 sq mi) and, at the 2011 Census, had a population of 15,955. It includes the towns of Port Fairy, Koroit, Mortlake, Macarthur, Peterborough, Caramut, Ellerslie, Framlingham, Garvoc, Hawkesdale, Kirkstall, Panmure, Mailors Flat, Purnim, Wangoom and Woolsthorpe. It also entirely surrounds the City of Warrnambool, a separate local government area. It was formed in 1994 from the amalgamation of the Shire of Belfast, Shire of Minhamite, Borough of Port Fairy, and parts of the Shire of Mortlake, Shire of Warrnambool, Shire of Dundas, Shire of Mount Rouse and Shire of Hampden.

The Shire is governed and administered by the Moyne Shire Council; its seat of local government and administrative centre is located at the council headquarters in Port Fairy, it also has service centres located in Macarthur and Mortlake. The Shire is named after the Moyne River, a major geographical feature that meanders through the LGA.

The council is composed of seven councillors elected to represent an unsubdivided municipality.

Localities in the Shire of Moyne