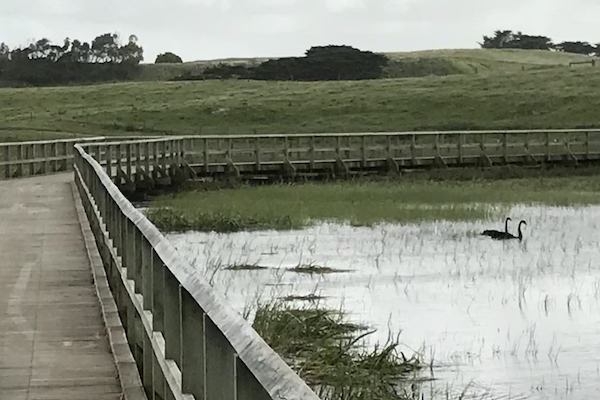 A gem of the South-West.

If you haven’t walked, jogged, or pedalled at least a section of the Port Fairy to Warrnambool Rail Trail, then do yourself a favour!  Engage the senses, improve your fitness, spend time with your family – or enjoying your own company.  Listen to the sounds of nature, or pop some headphones in and enjoy some tunes – or a favourite audiobook (I recommend any narrated by Humphrey Bower – including any of Bryce Courtney’s classics like Brother Fish or Power of One, or Shantaram by Gregory David Roberts).

It’s an old cliche, “The best things in life are free”, but seriously, at the cost of zero dollars, you can experience a magnificent day traversing through the wonderful countryside of south-west Victoria, admiring dairy cattle, sheep, horses and plentiful birdlife amidst the Merri River and natural drainage streams.

According to Wikipedia, “The Port Fairy – Warrnambool Rail Trail is a 37 kilometre rail trail in southwestern Victoria, Australia. The official opening of the trail took place on 31 May 2012 at the Koroit Railway station building.

The trail begins in Port Fairy, running north then east through Koroit where it turns back southeast to Warrnambool. About two thirds is within Moyne Shire and one third within Warrnambool City. The overall construction cost of the project was approximately $2.2 million.

The trail from Illowa to Warrnambool is not on the former rail track alignment, as that section of the rail reservation has been utilized for a realignment of the Princes Highway. Instead, from Lane’s Lane to Millers Lane, the trail follows the old alignment of the Princess Highway (now called Illowa Road) for several kilometres on a dedicated bicycle lane beside the roadway. The bicycle lane has been fenced off to provide greater safety. From the end of Millers Lane, the trail continues south off-road across Kelly’s Swamp, then east parallel to the coast to Levy’s Point. From there, the trail largely follows the cutting of the Merri River virtually all the way to the end of the trail at the Warrnambool Breakwater.”

Seriously, do yourself a favour!

Written, researched on foot, and photographed by Lucas Wilson